Update on the ARESEP tariffs for Net Metering

For a long time we have been patently waiting for the Net Metering policy to be enacted. Every time that ARESEP and MINAE have been close to having it completed they had to extend the process because of changes.

Costa Rica Solar Solutions was expecting everything to be completed in July of 2015 but with the change of policy from public to private services that extended the process and the President of Costa Rica created a decree to back it up.

Fast forward to March 9, 2016, The Methodology and Tariffs have been posted from ARESEP. The open forums have been completed and now a deadline for April 7th 2016 is set for the electric companies to allow net metering.

Please follow these link for more information on tariffs, they have not changed much. ICE is .05 cents per kWh and CNFL is .03 cents per kWh with one year of banking. Link to ARESEP TARRIFF

We are now having meetings with the power companies to find out what the process of permitting is for ICE and CNFL. Expecting to be able to submit the permits prior to April 7th.

We do understand, the process has been long and frustrating but Costa Rica is making a change in their whole energy policy. You will soon see the benefits of having solar to lower your cost and dependency on ICE.

Rates generation distributed access rates: RIE-058-2015 – Set the following fees for access concept distribution network of small-scale generators for their own consumption that are integrated into (SEN) National Electric System, as follows: 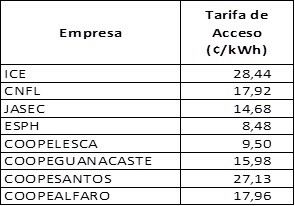 This rate is applicable to the kWh consumed by the generator on a small scale for their own consumption that are integrated into the National Electricity System (SEN) from its own generation, pursuant to Rule POASEN (Article XII). For kWh consumed from the distribution network they will apply the rate established in the existing tariff schedules of each company, which already include the corresponding fixed costs access to the respective distribution network. If consumption of a particular month is zero, the cost of access is calculated based on the average of the energy consumed in the last 6 months, regardless of the origin of the energy consumed (generation own self-consumed or supplied by the distributor ).

In the case of those fees that are charged for energy and power and lower consumption limit, this limit must be understood as calculated from the total consumption, regardless of the origin of the energy consumed (own generation self-consumed or supplied by the distributor) .

Interconnection rates: RIE-059-2015 – Fixed the following interconnection charges for small-scale generators for their own consumption that are integrated into the National Electricity System (SEN) applicable to all distribution companies depending on the type of meter, as detailed below :

Cargo (colones): for users requiring single phase meter that has remote reading, the distributor may charge an additional amount of up to ¢ 335,638, whenever technically justified and this concept is included in the respective contract. Application: interconnection charge is the cost that all distributors of electricity will be charged to the person concerned to interconnect and operate a generator (stop operating or working) in accordance with the technical standard AR-NT-POASEN and other regulations promulgated by Regulatory Authority. The costs shown include basic inspections provided for in the procedure for interconnection of micro and mini generators to the electricity distribution network. Additional inspections will cost equal to the fixed cost of service.

Rates sale of surplus: RIE 54-2015. The rate of sale of surplus (includes the weighted cost of electricity purchases ICE and its own system of generation), which would be to pay the distribution company to each user for each kWh of surplus injected into the system: Sale surplus 2015: surplus sale 2016: 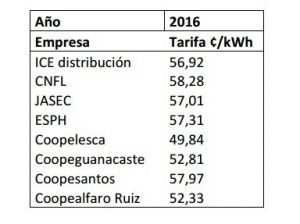 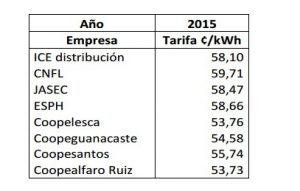 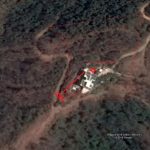