Costa Rica Solar Solutions is proud to present the largest commercial solar system in Costa Rica to date (as of August 1, 2014)! Llobet clothing store in Alajuela is the first commercial department store to go green with a 55kW, SolarEdge 220 panel solar system. Click here if you would like to see the monitoring of this system.

Tienda Llobet has more than 80 years of professionalism, being the premiere department store in the country. Their solar initiative was a landmark movement for clean energy in Costa Rica.

One of the most common questions is “What happens when a cloud goes by?” The amount of energy produced will depend on direct and indirect sunlight, and how much precipitation is in the clouds. What ultimately matters most is not hourly production, but the sum of production over the entire year.

(to determine the solar hours) to the yearly production from the system. Below, you will find the graphs following a similar pattern.

The Best and Worst Months!

End of the Month

Tienda Llobet had many reasons why they wanted to install solar energy on their roof. Social responsibility, environmental clean energy and lowering the cost of their carbon footprint. One of the important reasons was also to lower their monthly bill with a reasonable return of investment.

The system was designed to offset 45% of their energy, in many cases system produced better than expected because of the higher radiation of solar in 2015.

One of the most common myths is that “Solar Energy is not a good investment unless you are selling back to the grid! ” As you will see in the examples below of the billing that Tienda Llobet has been enjoying a substantial amount of savings, under the past ICE pilot program. If they were under the current ARESEP tarrifs instead of paying 30 cents per kWh they would be paying 5 cents. Which would you like to pay? 5 cents or 30 cents per kWh? 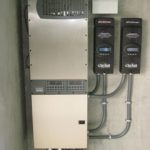